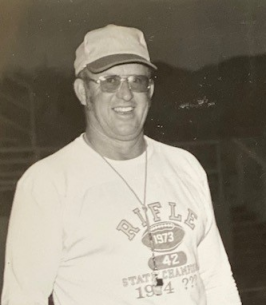 Gordon Cooper passed away peacefully on March 15, 2022 at the Colorado State Veterans Nursing Home in Rifle, Colorado.
Gordon was born to Cecil and Rosella (Turner) Cooper of McGill, Nevada on April 1st, 1930.
He graduated from White Pine High School in Ely, Nevada in 1948, where he excelled in playing football, basketball, and track and field.
In 1948 Gordon’s athletic prowess caught the eye of a newspaper editor from Denver, Colorado who was a University of Denver alumnus. He contacted the head football coach at the University and notified him of this speedy kid with glue-like hands wreaking havoc in the desert. It was a connection that forever altered the look of DU football.
In three seasons at the University of Denver, from 1949-1951, Cooper and quarterback Sam Etchevery combined to form one of the most dangerous passing combinations in the nation. The results they achieved together will stand as the most prolific in the history of DU football.
Cooper’s total receiving yards in each of those three seasons became the top three single-season marks in the program’s history. He was a first-team All-Skyline Conference selection in each season, and when the football program ended following the 1960 campaign, Cooper held the Pioneers’ career records for receptions (113), receiving yards (1,577), and touchdown catches (18). He also competed in baseball and track and field while at the University.
Cooper also holds DU’s single season records with 46 receptions, 607 receiving yards, and 8 touchdown receptions.
As his DU career ended in 1952, Cooper was a 6th round draft choice of the Detroit Lions. However, after playing in three exhibition games, Cooper was drafted into the Army. While serving 21 months in Germany, Cooper played competitively at military bases and suffered a serious knee injury. When he returned to the Lions, Cooper did so without the speed that had made him such a force in Denver. Following a one-year stint with the Canadian Football League’s Montreal Allouettes, Cooper returned to DU to serve as the Ends Coach for the Pioneers’ freshman football team.
Although his playing days were over, Cooper still made a monumental impact in athletics.
After earning a Master’s Degree in secondary education at DU in 1956, Cooper and his wife—high school sweetheart Vonda—moved to Rifle, Colorado. There, he embarked on a lengthy career as a teacher, guidance counselor, coach, and administrator at Rifle High School.
Cooper spent 31 years at Rifle High School before retiring in 1987.
While working at Rifle High School his impact was significant. He coached football, baseball, track and field, and started the wrestling program while also serving as the Athletic Director. He led the Rifle Bear’s football team to 2 State Championships: Co-Champions in 1961, and State Champions in 1973. He led the Rifle Bear’s Baseball Team to 2 State Championships: in 1981 and 1985.

Cooper was named Coach of the Year by the Colorado High School Activities Association for Football in 1973, and for Baseball in 1981, 1984, and 1986.
On October 14, 2010 Gordon was inducted into the University of Denver Athletic Hall of Fame for Baseball, Football, and Track and Field (1948-1952 and 1956).
The Colorado Dugout Club Coaches Association inducted Gordon into their Hall Of Fame Class of 2020.
Most of the faculty members and students at Rifle High School today probably haven’t met Gordon Cooper. However they may see his name every day-- the school’s baseball field is named Gordon Cooper Field.
In addition to his considerable athletic accomplishments, Gordon was a Rifle Fire Department Volunteer from 1959 to 1979. He enjoyed his life in Rifle and took advantage of all that the wild Western Slope had to offer, regularly enjoying his hunting and fishing opportunities.
Gordon was preceded in death by his wife Vonda Cooper, his parents Rosella and Cecil Cooper, his sister, Valene Laird, and his brother Bert Cooper. He is survived by his two sons, Steve Cooper (Connie) and Shawn Cooper, and grandson Connor Cooper, along with countless family and friends.
In lieu of flowers, please make a donation to the Gordon R. Cooper Scholarship Fund, C/O Alpine Bank 100 East 4th Street, Rifle, Colorado 81650
A celebration of life service is scheduled for 10:00 am on April 2, 2022, at Rifle High School, 1350 Prefontaine Ave., Rifle, Colorado 81650.

All rights reserved. This obituary is also archived at obittree.com